From Heimaslóð
Jump to navigation Jump to search 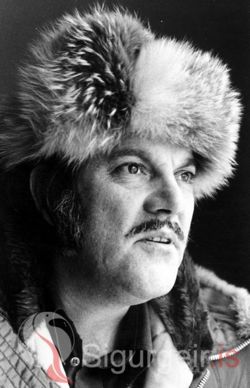 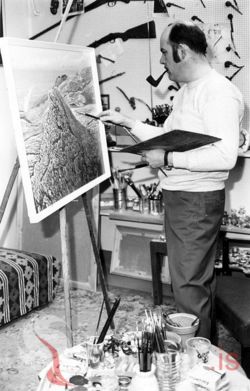 Guðni Hermansen was born 28 March 1928. His parents were Störker Hermansen and Jóhanna Erlendsdóttir.

Guðni married Sigríður Kristinsdóttir on 10 May 1950. They had two children, Kristinn Agnar and Jóhanna.

Guðni was not instructed in the art of painting and was mostly self-taught in the area. His pictures are considered special and his unique style is clearly noticable. Páll Steingrímsson, the foremost film producer of Vestmannaeyjar, said about Guðni's pictures: “His pictures are most often dream visions and thus a part of his feelings. This increases their value and makes them unique.”

Guðni was called “the local painter “of Vestmannaeyjar. That is an appropriate name since he sought the material for his paintings constantly from the nature and surroundings of Vestmannaeyjar.

Art was in Guðni's blood. Apart from being a talented painter he was a noted talent on the music scene. At a young age he learned to play piano and accordion but as the years passed he was most known for his saxaphone playing. For years he played in jazz bands in Vestmannaeyjar. After World War II there was a growing interest in jazz in Vestmannaeyjar and that interest produced many skillful musicians. The relatively great talent in Vestmannaeyjar was noticed by the best players in Iceland.